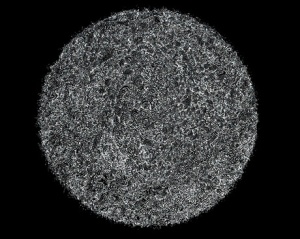 The universe as it is described by current science is composed of the following:
More than 72 percent Dark Energy.
23 percent Dark Matter
4 percent hydrogen and helium.
.03 percent heavy elements

In other words, over 95 percent of the universe consists of unknown, unobserved, indirectly inferred, hypothetical energy and material. All of science deals with only the 4.03 percent of the universe that is made up of hydrogen, helium, and the heavier elements. That 4.03 percent is what we are composed of as well.
Dark energy and matter can not be observed directly. Their existence is inferred by perturbations in the fields of matter and energy comprising the known universe. While their existence can be inferred, no further knowledge of the nature of dark energy and dark matter is available at this time.
digital image by TFD: Dark Energy Dark Matter, 2008
*
Some research references for Dark Matter and Dark Energy:
http://www.site.uottawa.ca:4321/astronomy/index.html#darkmatter
http://ideafestival.typepad.com/my_weblog/2007/09/michio-kaku-par.html
http://www.google.com/search?hl=en&safe=off&q=dark+matter+definition
http://en.wikipedia.org/wiki/Dark_matter

One response to “Dark Energy and Dark Matter”

Your comments are welcome. Cancel reply