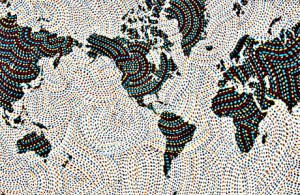 “Nature is ever at work building and pulling down, creating and destroying, keeping everything whirling and flowing, allowing no rest but in rhythmical motion, chasing everything in endless song out of one beautiful form into another.” – John Muir
*
A universe is well-described as a pattern of information…an infinitely complex, self-similar, resonant instance of a chaotic system, extremely sensitive to initial conditions and as adaptable and intelligent as the living entities it brings into being. The great thinkers of our era from Alan Turing to Stephen Hawking have produced explanations of the conditions and processes for bringing a myriad of possible universes into and out of existence by means of the probability fluctuations which must exist within states of non-existence, which are likened to a vacuum or void.
These fluctuations lead inexorably to the infinitely varied forms of material, energy, information, and thought we can experience in a lifetime. In other words, it can be clearly and mathematically demonstrated by contemporary science – just as it was understood by the ancient Vedic philosophers – that something arises spontaneously from nothing. In other words, information is created where there was none. And this information, over time, is intelligent.

Microwave radiation from birth of the universe

*
From the simplest field of universal energy that pulses with primordial existence – the heat radiation left over from the Big Bang that permeates the known universe at a temperature just slightly above absolute zero – to the largest pattern ever discerned – the shape and distribution of matter and energy in super-galactic space – a fine-grained structure is revealed, a complex pattern of information.

Distribution of galaxies beyond the Milky Way
*
Of course, in order for information to be information – and not simply data – there must be intelligence to decipher it. We only have to look in the mirror and in the eyes of our companion animals and the many forms of life around us to see clear evidence that the universe does contain intelligence. To simply describe the universe as a pattern of information misses the most significant aspect of what makes information meaningful. What we have before us in all its magnificent presence is a most intelligent universe.

YouTube Video from “The Secret Life of Chaos” Last broadcast on Thu, 25 Mar 2010, 20:00 on BBC Four
*
First Image: “Intelligent World” by Tullio DeSantis, acrylic paint, world map, and digital image, 2010.
Second Image: Cosmic microwave fluctuations over the full sky represent the tiny temperature fluctuations of the remnant glow from the infant universe. NASA image: http://www.nasa.gov/topics/universe/features/wmap_five.html
Third Image: Panoramic view of the entire near-infrared sky reveals the distribution of galaxies beyond the Milky Way. The image is constructed from the more than 1.5 million galaxies in the 2MASS Extended Source Catalog (XSC), and the nearly 500 million Milky Way stars in the 2MASS. UCLA/JPL Image: http://wise.ssl.berkeley.edu/2mass.html

Your comments are welcome. Cancel reply