The End of the World

On my way home I pass a man.

“The wisest man in the world.”

roll down the window,

and feel the cold.

“I don’t think so. This is the middle of Pennsylvania.

It’s not the end of anything, much less the world.”
“Well, if you let me go along with you for a while, I’ll show you.

“No problem,” he says.
He gets in, shoves the sign in the back seat.

We drive on.
“Your sign says you’re the wisest man in the world. Is that so?”

“It’s the middle of winter. That means we are all dead. And we won’t wake up until spring. We die all the time but we don’t notice it because we all die at the same time,” he says.

“Do we all wake up at the same time then, too?”

I’m thinking my passenger is clever, but he’s not the wisest man in the world.

“That’s it.” he says. “Don’t think another thought. I’m getting out right here.”

I bring my car to a stop. There’s nothing on either side but an old cornfield. He gets out and walks up a slight rise through snow and corn stubs. As he reaches the crest and descends, he seems to disappear.
Just before that he drops a small piece of paper.

I have some time.

I pull over, park, and follow his frozen footsteps.

At the top of the hill I find a folded note.

and read the note:

I am old and I will die

It is time to come clean.
I woke up at an early age.

I lived a normal life.

So that you believe me

when I reveal all.

I will do that now.
It is not comforting to know

Hearing this will not set you free.

Freedom is not for us in this life.

We cannot be other than we are.

We pass our time with useless things

As if we live forever.

It is our bodies doing this.
Our minds know very well we die.

But our bodies refuse to hear of it.

Our bodies desire the useless things.

We go about our days in service to these dumb limbs

Serving them endless amounts of what they desire

But does not sustain them

Making them as comfortable as possible, as they demand it

Because they refuse to accept they will die.

Our brilliant minds are filled with petty annoyance.

Constantly forcing us to confront ourselves in mirrors

So we can see the damage we’re doing.

And while we know love is the answer,

We are faced with the hard fact

We are our bodies.

And because they are such stupid brutes

They are utterly unlovable.

I am good looking enough to know looks are worth nothing

And wealthy enough to have figured out it has no value.

I am intelligent and know I can never be smart enough.

I see far enough to see an end.

Once it is yours you see right through it.

It is nothing at all.

The secret of life is life.

We all possess it for a while.

It is time to say

We know it then.

We were already dead.

And the inexorable slide of gravity
They see our bodies

It freezes white in solid air

As if our souls are there

Out cold in orange-yellow bays

Shocked by the knowledge

Sentences are chunks of ice.

Once they are formed

That part of the brain stops thinking

And just repeats the words

We end up with titanic icebergs

Words and Image by Tullio DeSantis
*

I Am A Photon Stream

The classical idea of discrete particles – the indivisible
atoms of Democritus – gave way, for a time, to the powerful idea of
electromagnetic waves. We discovered an entire spectrum of invisible energy. We
are exploiting it for our purposes.

But the universe is far stranger than this. Once we could conceive, in our mathematics and science, our art and our poetry, the
idea of everywhere-interpenetrating waves, we were compelled to consider even
more of the mysterious quantum universe we inhabit.

What is often referred to as the most astounding
discovery in science – the principle of complementarity – demonstrates
experimentally that electromagnetic radiation exhibits essential characteristics
of the mutually exclusive categories of wave and particle. This
paradigm-shifting result indicates that what is evolving is our own ability to
comprehend ideas that defy much of our common experience.

We are limited only by our capacity to comprehend our
situation. Fortunately, this is something that seems to increase. As it does,
we will continue to discover new territories, new dimensions which have been
here all along. We just need to develop an ability to imagine them.

I Am A Live Wave 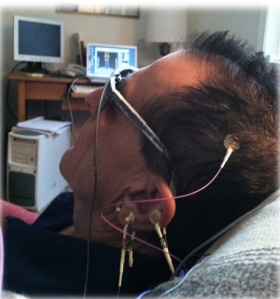 Doing
research and development on EEG-driven applications has provided me with new insights into the nature of the electromagnetic waves emitted by living systems. Leading-edge scientific and philosophical
paradigms converge in striking ways when technologies of life and the mind are involved.

For example, minute changes
in electrical potential, which may be measured outside the head can be
represented as a series of waveforms derived by techniques of mathematical
analysis, such as the FFT (Fast Fourier Transform). These EEG waves range from above
zero to about 50 cycles per second. Some characteristic frequencies are
observed to correspond to basic states of consciousness, from deep sleep and relaxation,
to alert wakefulness and high-order thought processes.

This is significant.
It is why the EEG measurement has value in medicine. The characteristic
frequencies of Delta, Theta, Alpha, Beta, and Gamma waves transmitted by a
human (animal) brain are signals, which provide vital information regarding
essential functions and well-being. They
may also indicate a range of dysfunctions from traumatic brain injury and
epilepsy to states of anxiety and PTSD.

When viewed
as a complex non-linear system, the electromagnetic field patterns of the brain
may be studied using the sophisticated tools of mathematical analysis from
domains as diverse as chaos and information theory, fractal geometry, and
quantum dynamics.

In a palpable
way, we are beginning to see the mind in action – its cascading complexities, branching
fractal dimensions, harmonic resonances, and strange attractors. And because we
are involved in our environment in countless biological and neurological
feedback loops, we are able to train ourselves to produce optimal rhythms,
while learning to minimize problem patterns.

We have
learned also to encode simulacra of these patterns of our thinking into
machine-executable algorithms. The world we inhabit has become a nexus of natural
and artificial intelligence. Somewhere between the spiraling microscopic
strands of DNA within us and spiral galaxies beyond the Milky Way, our cybernetic
selves encode – and are encoded in – symphonies of synchrony, which echo endlessly in vast chambers of space and time. 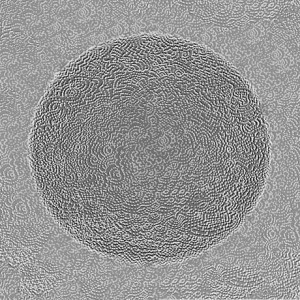 Death obliterates but leaves something in its wake: the
imponderable journey from nowhere to fetal life, months in utero,
recapitulating the million mutations of animal ancestry, brilliant
consciousness, fathomless dreams, sharp sensations of self and other, self and
family, self and society, the rise of sex and strength, hormone surge of
adolescence, years of senseless risk… then the circular routines of
adulthood, establishing rank, predictable patterns of behavior, reinforced
roles of dominance and submission, while the timeless world spinning
transformative surrounds us, dragging down the tilted frame of old age, holding
out against the fear of an inevitable annihilation. Instantaneous, unearthly,
alien, death unhinges us with utter unconcern. What remains?

The Rest of My Life

The Rest of
My Life

There’s a man
I’ve yet to meet

He lives at
the farm across the lane

Been there as
long as anyone can remember

I see him,
dressed darkly, sitting on his tractor

He can raise
a thousand acres of corn with that thing

And he can
cut them right down again

Staring only
at his wheels

When we moved
in here

I waved the
first few times he passed

He never even
saw me

So I stopped
waving

He’s a
veteran, a hero, survivor

The subject
of a book and a film

These days
though, he walks slowly

Out to the
mailbox and back

The other day
I passed him in my truck

Right there
on the end of the lane

He seemed to
pause at that very moment

Stared in my
direction

I almost
waved at him

But he wasn’t
looking at me

He had just
mailed a letter

And turned
around to walk back

Maybe he was
having second thoughts

He seems the
kind of man

Who knows the
weight of his words

I keep
thinking I should go over there

But I never
get to it

If not, he’ll
come by

I have
something he wants